PlayStation 4 will be officially announced within one hour and I’m following the release closely:
http://www.techradar.com/news/gaming/consoles/ps4-release-date-news-and-features-937822

PS Move controllers will certainly be supported by PS4 and some rumors suggest that they will be accompanied with full-body motion sensors:
http://www.techradar.com/news/gaming/consoles/ps4-promises-new-styles-of-play-more-motion-control-and-social-1130204 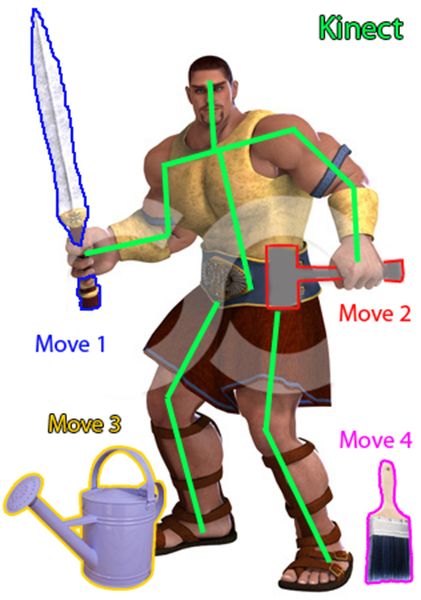 The above concept image illustrates an example how a Kinect-controlled gladiator character can grab and interact with multiple objects that are represented by PS Move controllers. This is different from current Kinect games that do not use controllers that are both tangible and location tracked. In a two-player game this allows a game mechanic where players are required to share several tangible tools (PS Move controllers) in order to advance. Different characters can also posses unique ways of using the tools; a skilled character can use a hammer to build things, while a strong character can use it to break otherwise unbreakable doors for example.

Regardless of where Sony is going with PS4, we are going to explore the possibilities of using Kinect and PS Move together in virtual reality and game applications with RUIS, and encourage others to follow suit.

Update: PS4 is fully compatible with PS Move and DualShock4 has a PS Move-like light bar presumably for position tracking. The new PS Eye is actually a stereocamera (it has two RGB sensors), which can provide depth images similar to what Kinect outputs. Depth images generated from two RGB images can be less accurate though, depending on the texture of the objects in view.

P.S. Do tell me if you know where the original image of the gladiator is from, so I can give credit where credit is due. I photoshopped it a year ago but have subsequently forgotten where I got the original from.