Oculus Rift and other highlights from VR2013 conference

This year’s IEEE Virtual Reality 2013 conference was held in Disney World’s Swan Hotel in Orlando, Florida. Leading VR researchers and practitioners (most of you might recognize at least the one Palmer Luckey of Oculus VR) gathered together to present the latest academic research, commercial technology, and to discuss different aspects of VR. I was there to participate in the annual 3DUI contest with my immersive 3D user interface for Blender (which received the “Best low-cost solution” prize).

Above is a video of WorldViz’s Pit demo in all its glory. During the conference I tried it myself while being tracked by a high-end motion tracker and wearing nVisor SX111, a $30,000 HMD from NVIS. It was so immersive that I had my legs shaking, just from walking on a narrow plank high above the pit. The presenter encouraged me to jump down the 10 meter drop, something that I hesitated for a few seconds, even though I was fully aware of the virtual nature of the fall. No game that I have played with an external display has ever made me scared like that! While the 1.3 kg weight of the HMD was distracting when tilting my head up or down, the 1280×1024 resolution, crisp picture quality, and the 102 degrees horizontal field of view were simply amazing. 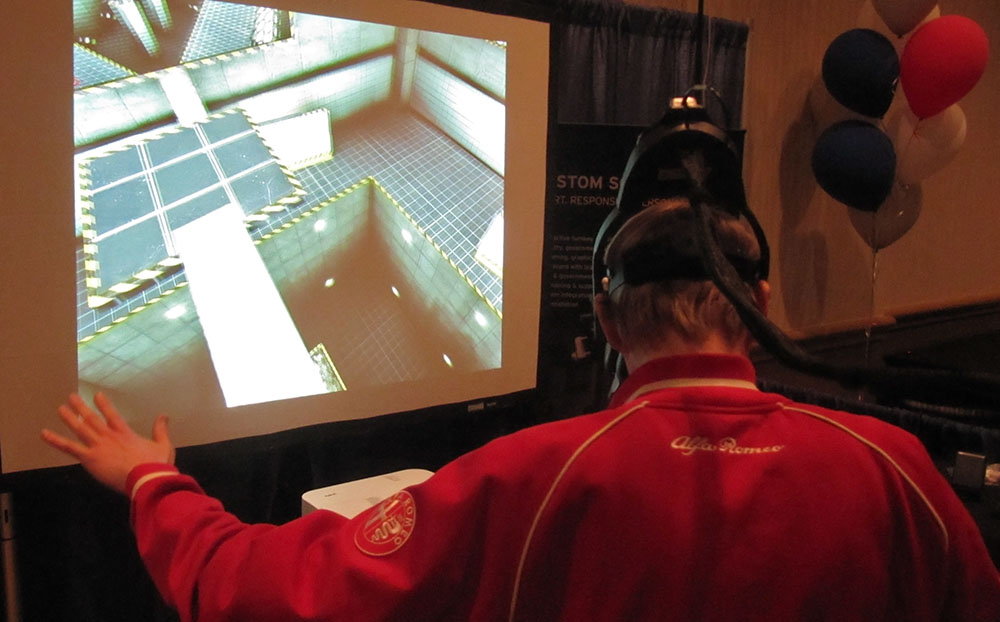 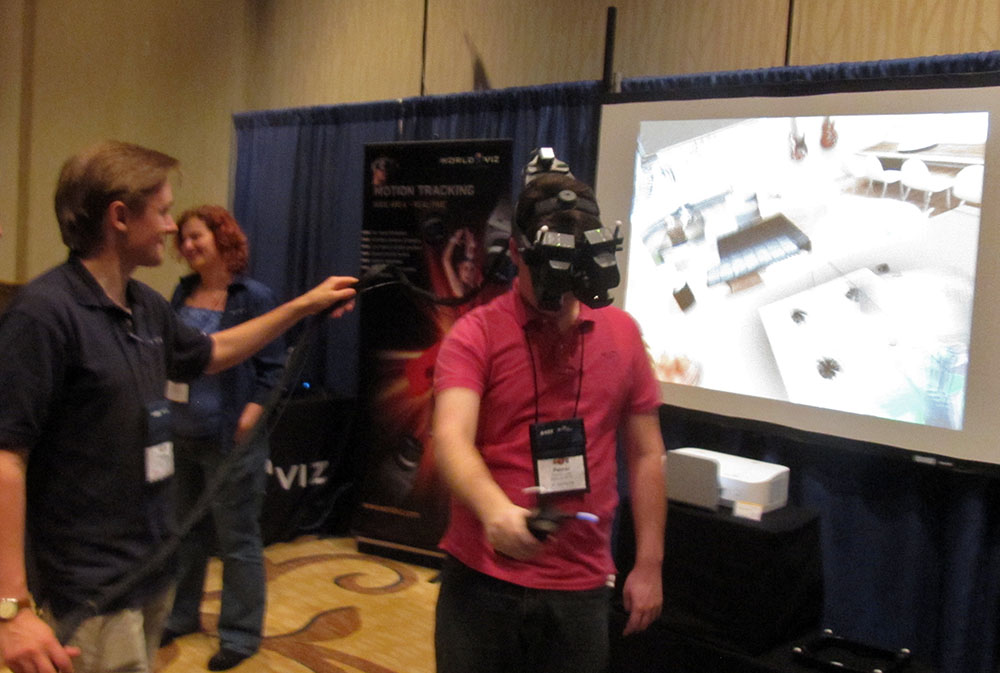 Sixense Entertainment is a company that is creating software for Razer Hydra, which is a 6 degrees-of-freedom (DOF) controller that reminds me of PlayStation Move. Their booth had an intuitive 3D modeling application called MakeVR running with Oculus Rift. It was not the final Rift version that will start shipping in the end of this month. Yet it was a very recent prototype, judging from the fact that it was not held together by duct tape. In the below two photos you can see Palmer experiencing Sixense’s MakeVR software with Oculus Rift. 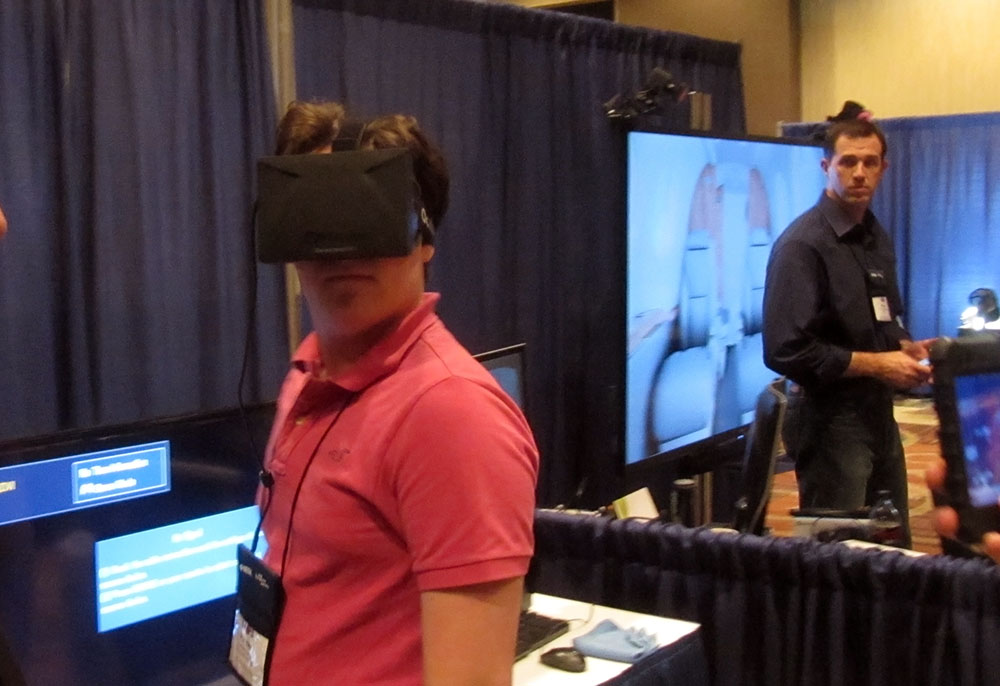 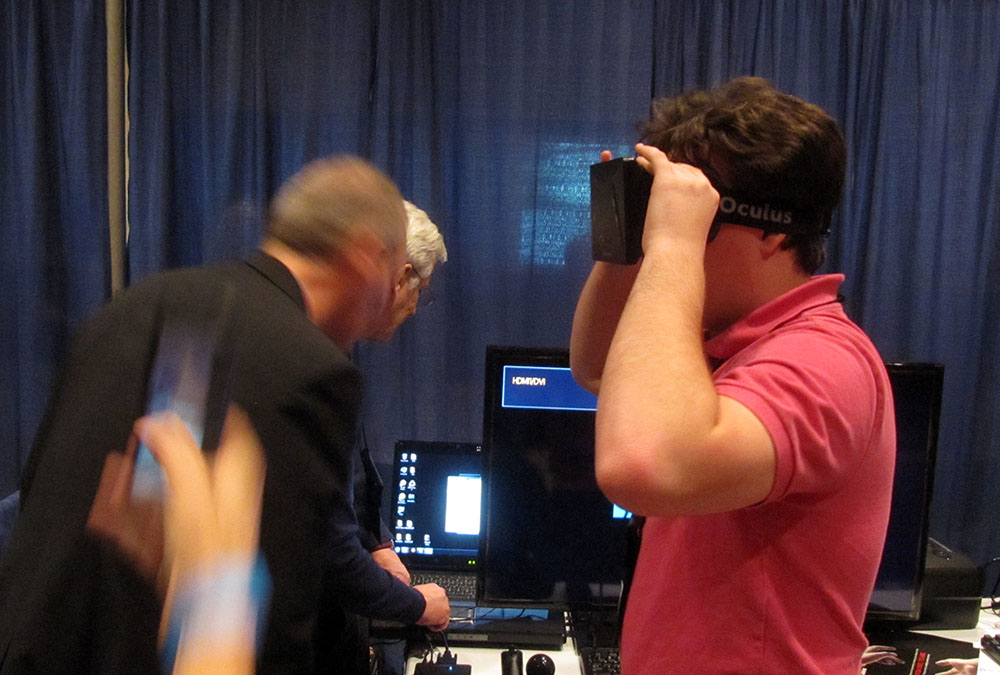 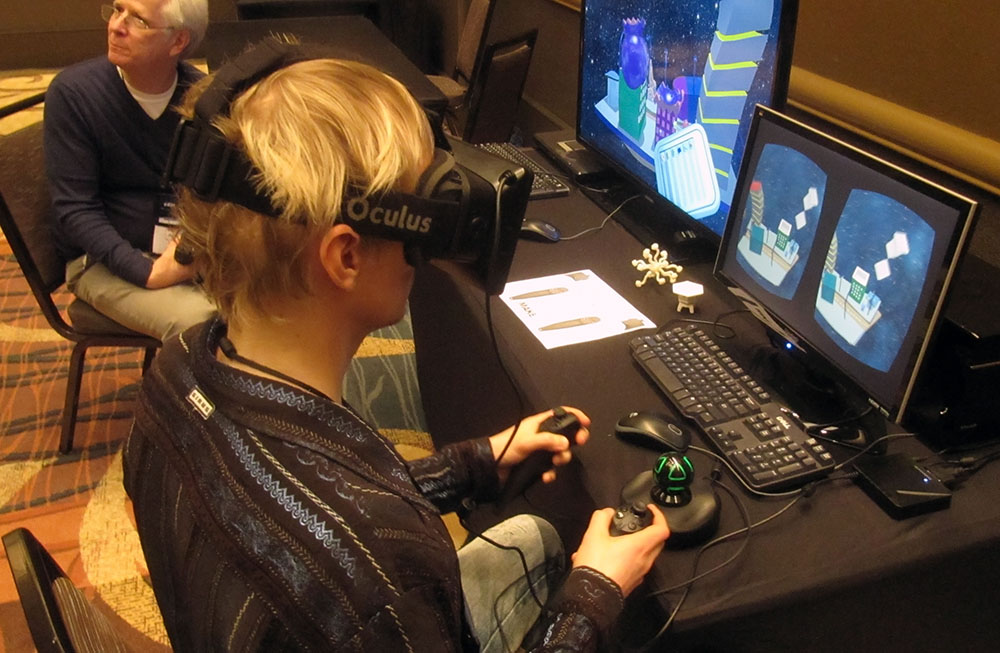 I have worn several HMDs in the past, ranging from professional $50,000 devices to Sony’s HMZ-T1. Putting on the Oculus Rift for the first time was an unforgettable experience. What struck me first was the low resolution and image blurriness (probably due to cheap optics). Before using the MakeVR application with the Rift, I had used MakeVR with a normal 2D display without problems, but now I was completely lost. The MakeVR interface (beta version) was not really optimized for the Rift, and the low resolution did not help the experience. This is an important reminder for VR developers that porting your application for a HMD requires plenty of user interface consideration, and that still does not guarantee that the application is easier or more efficient to use (while it might make the application more “immersive”). The resolution in the developer kit version of the Rift was so low that I could only read text elements of a floating 3D widget by bringing it so close that it covered everything else. Good luck for snipers in first-person-shooter (FPS) games: Just try to spot the enemy between these Duplo sized pixels. You can try it yourself by playing a game with a resolution of 640×800 and sticking your face close to the display so that it fills your field of view. Do note that I’m purposely comparing the Rift with high-end HMDs, because they set the bar when it comes visual quality.

It would have been interesting to try the Pit demo with the Rift in order to compare how much its lower quality optics and lower resolution impact the level of immersion. Unfortunately the Pit demo was not available for Oculus Rift.

While my first experience with Oculus Rift was a rude awakening, I have a very positive outlook for Oculus’ future. The Rift weighs very little, is very affordable, and the promised API support for UDK and Unity engines is just what the developers need. The low resolution of the Rift will be addressed in the consumer version (slated to be released in 2014). Oculus team is aiming to have at least 1080p display (960×1080 resolution for each eye) for the consumer version. Hopefully the optics will be adjustable for minimizing any blurriness. I’m slightly concerned that all the Oculus Rift hype that has been building up since August 2012 will backslash as a disappointed public reaction towards the developer kit version, and that backers & general audience will lose interest in the future consumer version. And that would be a shame as the consumer version of the Rift seems very promising. My opinion is that the developer kit version of the Rift will not deliver the VR bliss that some have been expecting. Instead, it will give developers the chance to refine their VR game and application concepts before the launch of the consumer version.

One of the most interesting panel discussions of the conference was the Consumer VR panel with Jason Jerald from NextGen Interactions, Palmer Luckey, Sébastien Kuntz from I’m in VR, David A. Smith from Lockheed Martin GTL, and Amir Rubin from Sixense. Palmer revealed that Oculus VR is well prepared to handle any liability issues that might result from users injuring themselves while using the Rift. Palmer also mentioned that Team Fortress 2 will have seven (if I remember the number correctly) different controlling modes for Oculus Rift that the player can choose from. “The least annoying one” from the seven modes was chosen as the default. The plethora of controlling modes highlights the challenges of developing 3D user interfaces, where there are no proper standards yet. This problem is pronounced when incorporating immersive technology to existing genres like FPS games, where we have a strong preconception about how they should be controlled. Some panelists argued that entirely new games should be created from ground up with VR in mind, instead of just porting existing games. It was also mentioned that in multiplayer games like TF2, players with the Rift will have a disadvantage compared to other players due to the head-tracked controls and low resolution. 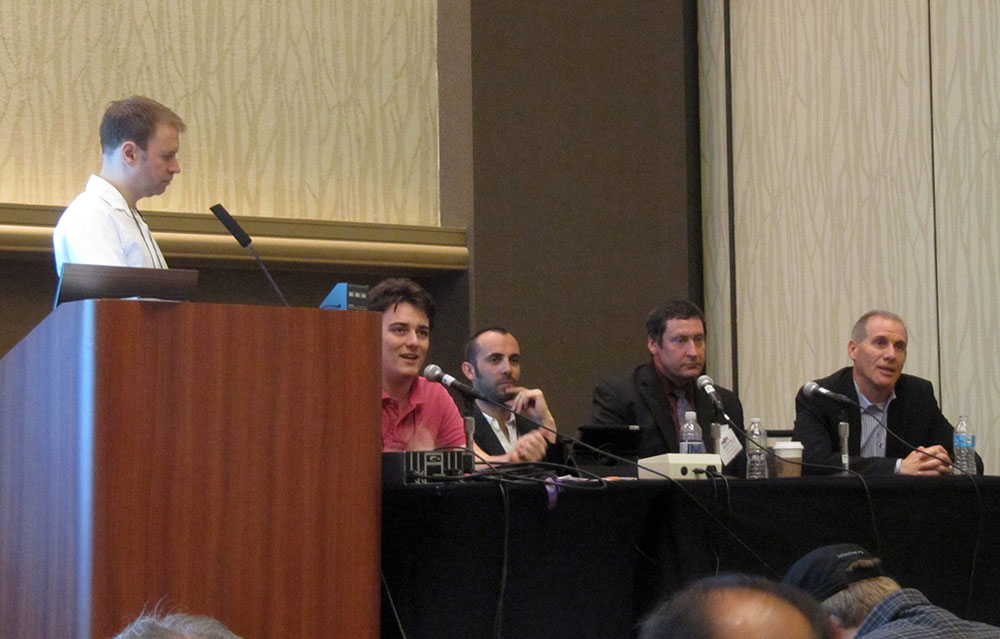 I got the opportunity to try on Google Glass, as one conference participant had brought it with him. While taking photos of Glass was forbidden, I had the pleasure of playing around with it. My experience was brief: Voice commands and the glass frame’s touch interface seemed to work nicely, with the exception that the device kept turning itself off, apparently because my messy hair kept brushing against the off button. Time to get a haircut..?

VR2013 conference had several commercial vendors, one of them being zSpace Inc. I’m quite excited with their device (also named zSpace), as I have experience with digital painting and 3D modeling: The zSpace is a 24″, passive 3D display that has four embedded IR-cameras for tracking a 6DOF digital pen and user’s head. The head-tracking allows rendering 3D content from user’s point of view, making zSpace a desktop fishbowl VR system that is meant for 3D artists. While the tracking and the 3D manipulation capabilities of zSpace are wonderful, their current version (priced around $4,000) is of limited use unless someone comes up with a killer graphics app that has an unprecedented workflow for a 3D user interface. I suggested zSpace’s representative that if they could make the screen to be like Wacom’s Cintiq while retaining the other features, that would be awesome: Digital artists could work with the device just as they would with their normal drawing tablet, and then seamlessly start doing 6DOF manipulation by just lifting the pen from the surface. This would be the best way to introduce 3D motion controls for artists; by extending the capabilities of the tools that they already use. 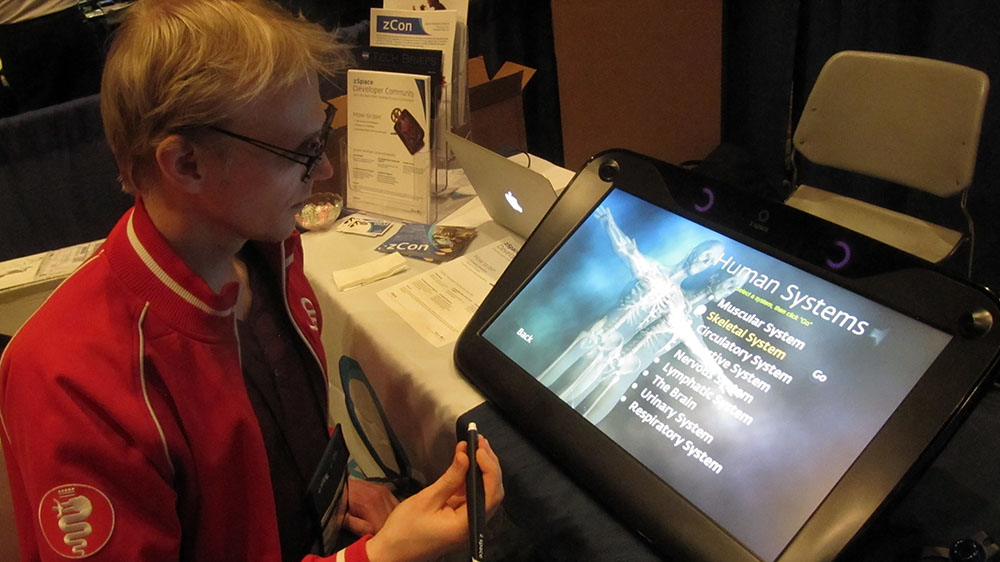 As part of the conference, various Florida Universities presented their VR related projects. Most projects dealt with medical systems, but there were other applications as well, like the Kinect controlled quadcopter seen below. 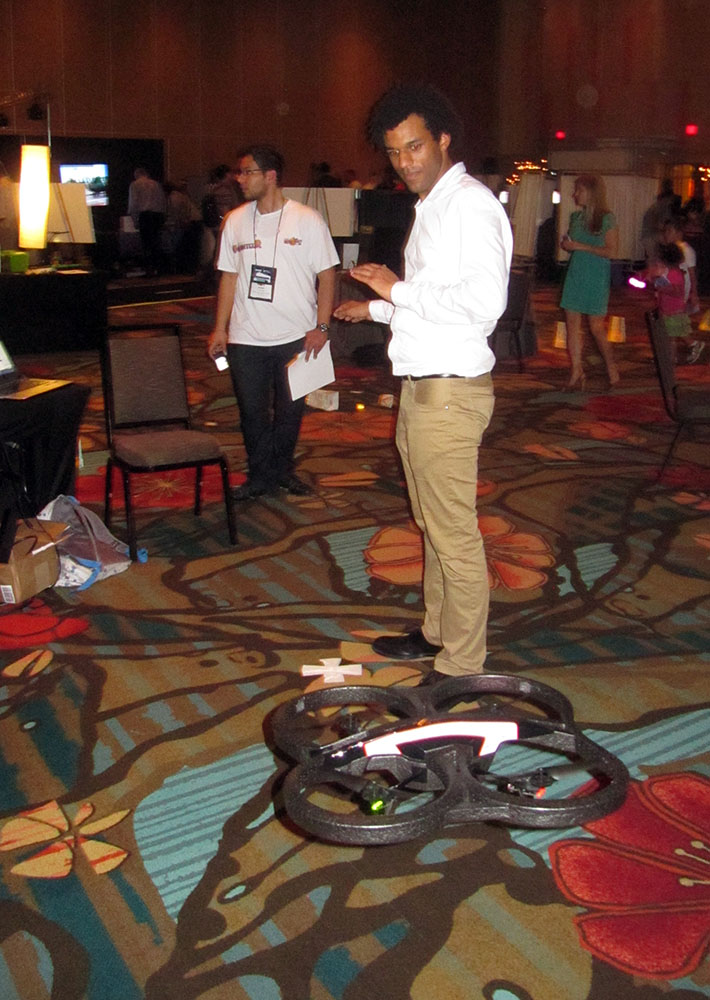 Sean is a robot portraying a 14 year old teenage boy straight from the uncanny valley (I’m thinking of Johnny Cab). Sean has an animated face that is rear-projected onto a head-shaped screen, making all kinds of awkward, lip-synced facial expressions. The wheelchair and Sean’s neck motion was operated by an actress who also performed live acting of Sean’s voice. She was nowhere to be seen in the exhibition hall, but she did a great job portraying the character using cameras mounted onto Sean. 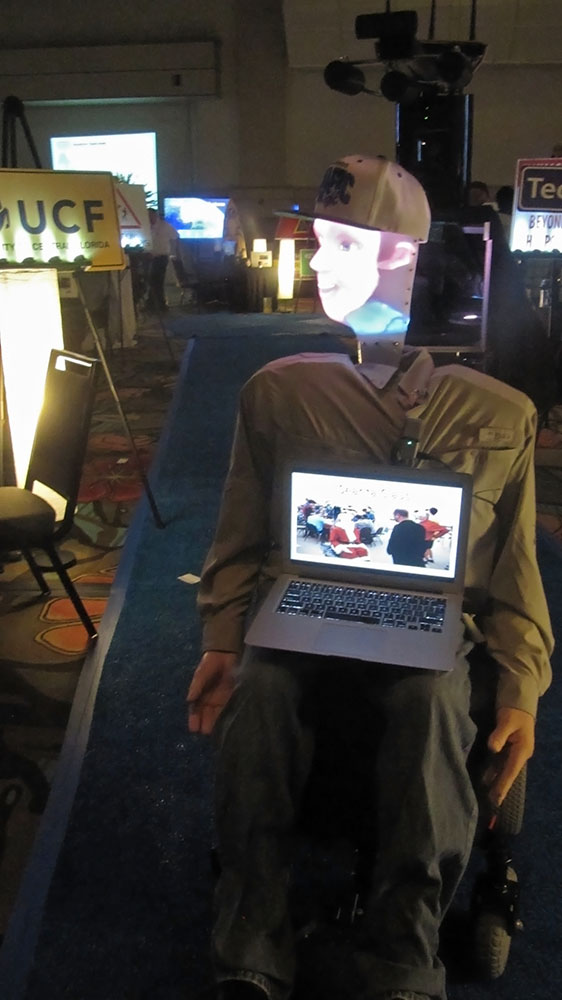 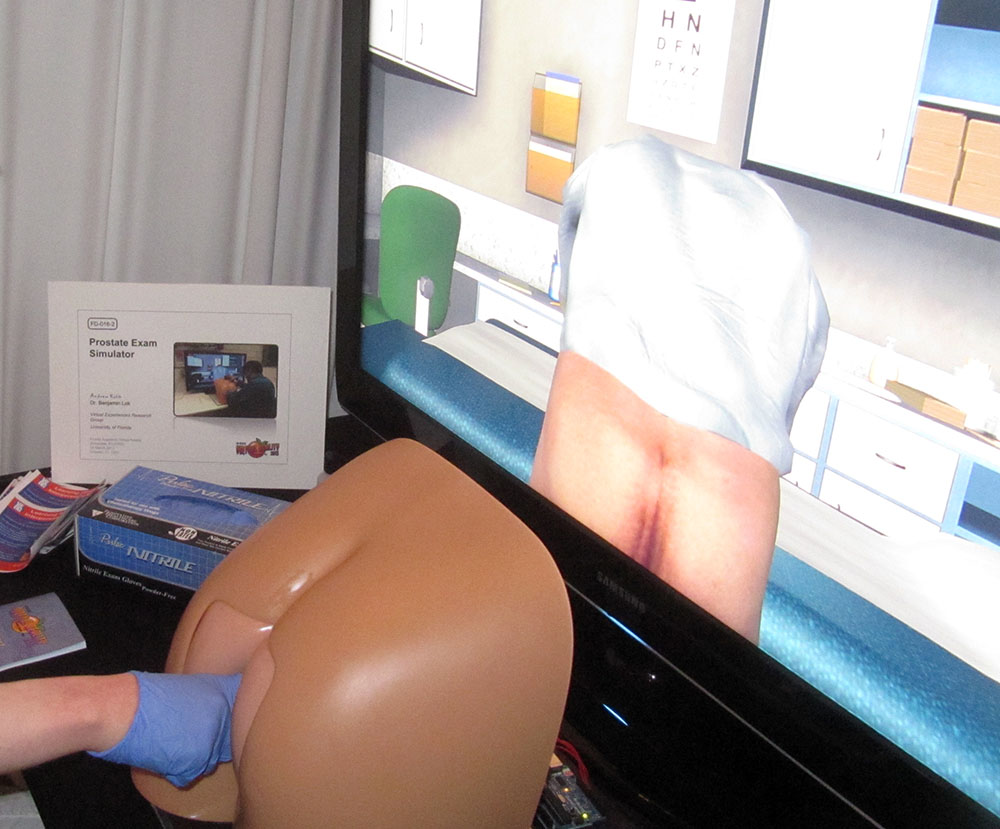 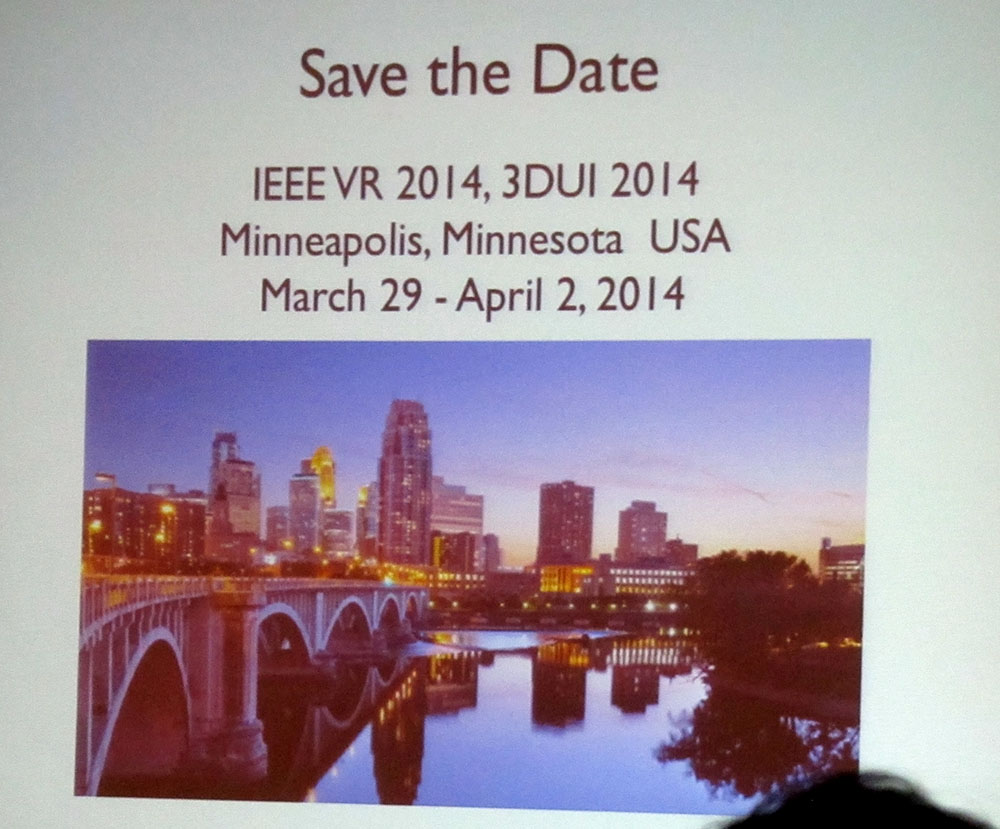 P.S. If you’re an aspiring VR game developer, you should go experience DisneyQuest in Walt Disney World. DisneyQuest has VR games that are pioneering in the sense that they have been used by large audiences. They are also not very fun (at least the ones I tried), giving developers ideas about what works and what doesn’t. 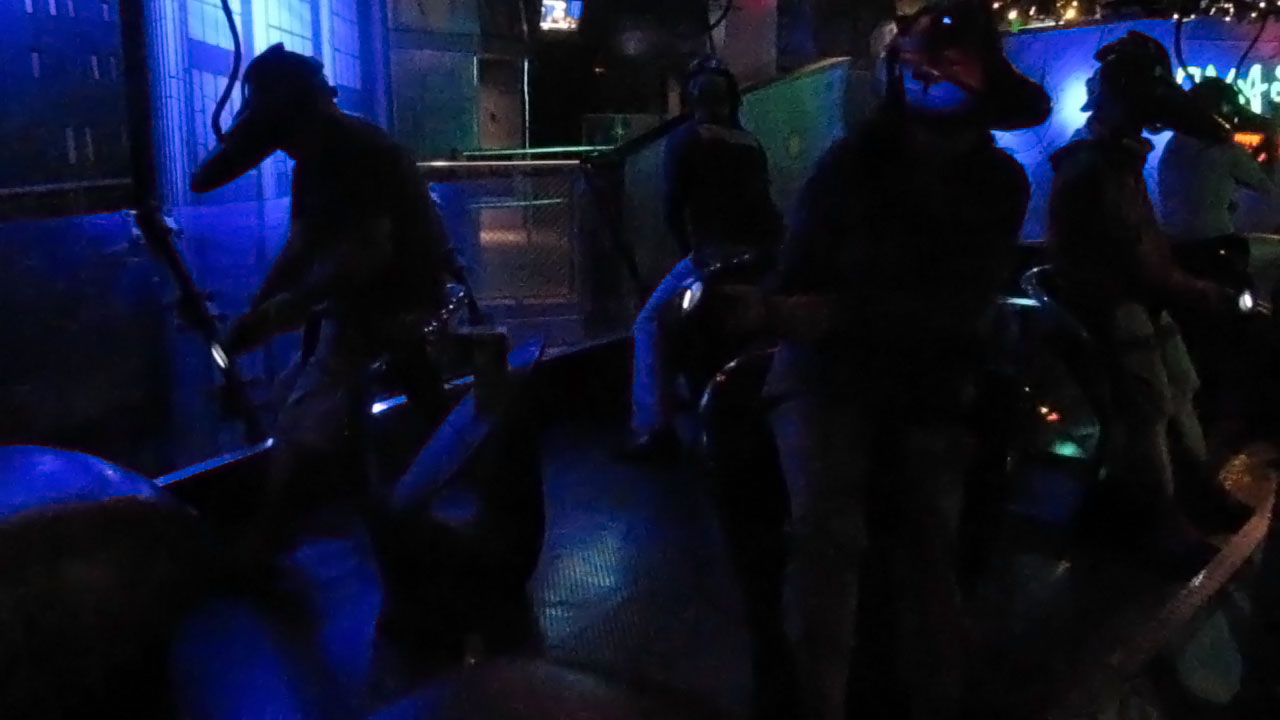 hihi!
View all posts by Takala →
This entry was posted in Uncategorized. Bookmark the permalink.

3 Responses to Oculus Rift and other highlights from VR2013 conference