I participated in the IEEE Virtual Reality 2014 conference that was held between March 29th – April 2nd in Minneapolis. Eager beavers can jump straight to the below link to see a list of the best papers and demos at the conference:
http://ieeevr.org/2014/awards.html 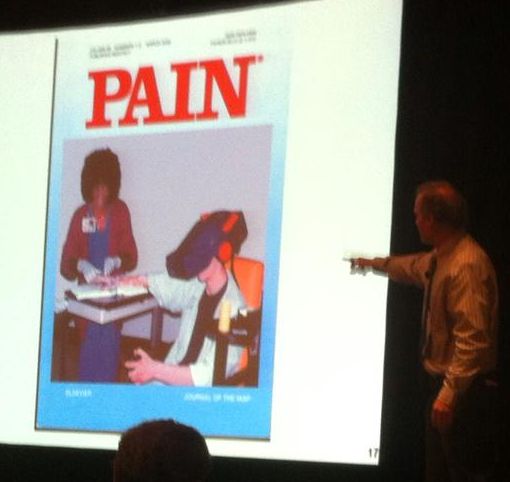 The biggest VR2014 highlight for me was trying out Tactical Haptics‘ Reactive Grip prototype:

Sense of touch is one of the major senses and perhaps the most challenging sense to provide with convincing virtual sensations. Currently haptic feedback is missing from most virtual reality applications. Reactive Grip could change that for many applications: it is cheap and simple haptic technology that could be integrated into any number of modern game controller variations. The handle of Reactive Grip utilizes four sliding contactor plates whose movement conveys the sense of inertia from the virtual object. Examples include gun recoil (kickback), struggle of a fish caught by a fishing rod, or hit of a sword against another virtual object. I tried bunch of demos that included those examples. Tactical Haptics have close ties with Sixense, and in the prototype motion tracking is handled via Razer Hydra controllers. 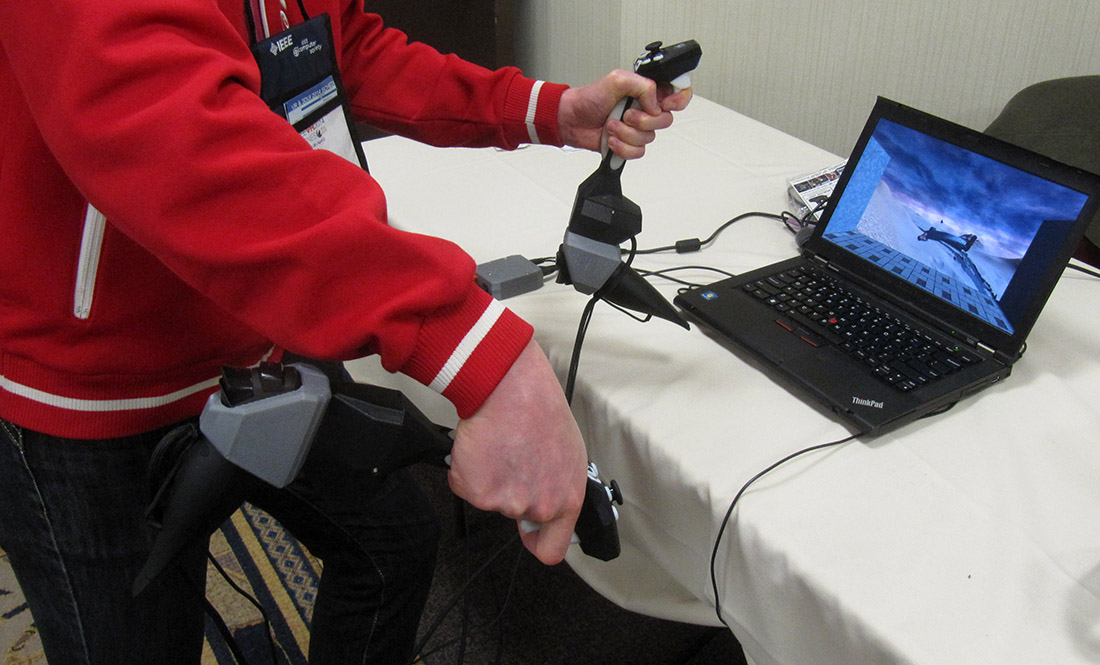 Reactive Grip has its limitations: because it is a game controller, the Tactical Haptics’ device can only approximate sensations from rigid, hand-held objects such as virtual gun grips, fishing rods, steering wheels, and other tools. For most games and applications this should be enough though. Reactive Grip is a mechanical device and I wonder how robust it can be. Traditionally haptic devices break easily.

Funny thing is that if you close your eyes when using the controllers, the haptic feedback alone doesn’t convey what you are doing in the virtual world, due to the vagueness and low fidelity of the haptic effect. But when combined with audiovisual cues, the different perceptions merge together gracefully providing more immersion than any of the cues alone. Most importantly, the haptic feedback doesn’t contradict the audiovisual cues but rather supports them. 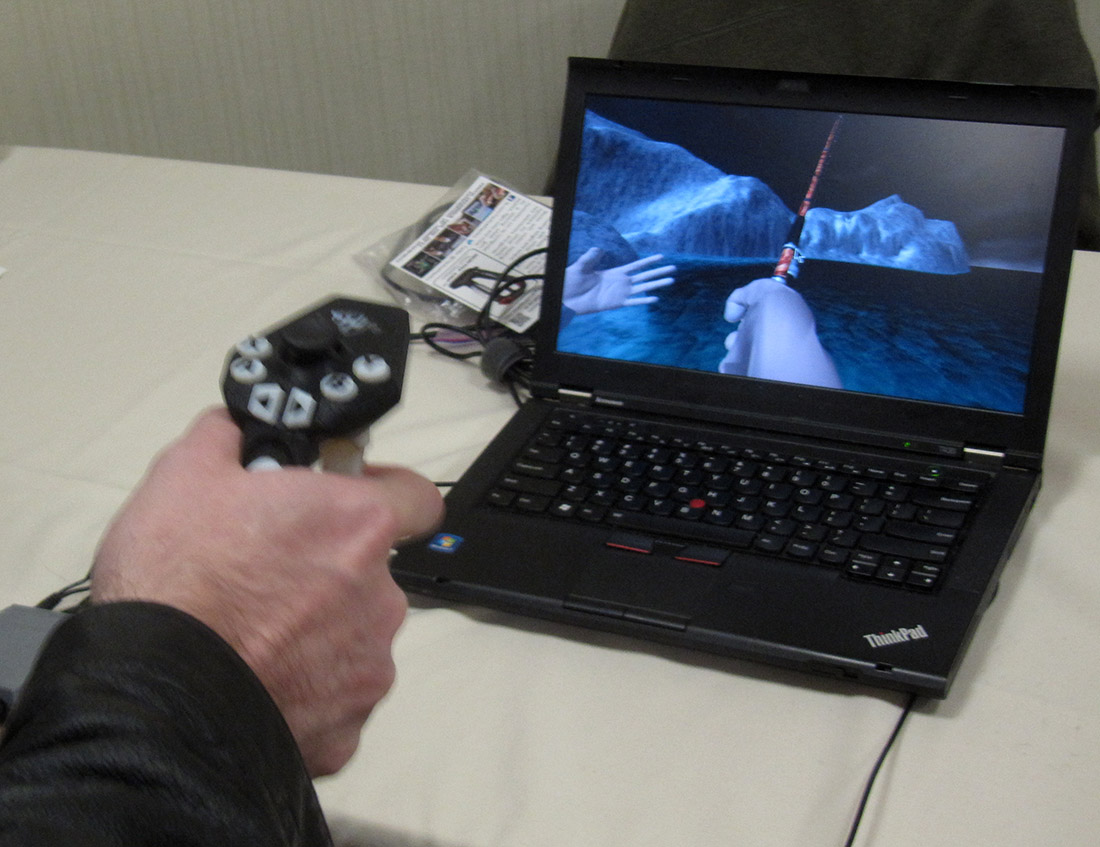 Tactical Haptics ran a Kickstarter campaign last Autumn that unfortunately didn’t go through. People really need to try out this controller to see its potential. Tactical Haptics’ invention is something that for the first time could bring haptic feedback to the masses, especially if one of the major console manufacturers would adopt it.

The acquisition of Oculus VR by Facebook was a big news topic throughout the conference. As such it was a pity that we didn’t get to see Crystal Cove or DK2 prototype of Rift. Vicon was in talks with Oculus VR to bring DK2 to the conference, but at the time Oculus canceled public demonstrations of DK2 due to the Facebook buyout. That’s what I heard anyway. Palmer Luckey was also supposed to participate in the conference, but apparently the Facebook acquisition and the related death threats to Oculus staff got in the way.

Several times I witnessed Oculus’ HMD referred as Facebook Rift and FaceRift. Perhaps there was slight bitterness in the air regarding the 2 billion dollar buyout? This is understandable as traditionally VR hasn’t been a very lucrative business, and suddenly seasoned VR researchers and practitioners see a VR company go from zero to a hero in less than two years.

I talked to a person who had tried Sony’s Morpheus, DK2, and Valve’s prototype. In his opinion DK2 and Morpheus were very close to each other performance-wise. He liked Valve’s prototype the best though, because of the wide positional tracking that was implemented with camera-based inside-out-tracking of fiducial markers. With Michael Abrash joining Oculus, hopefully the good features of Valve’s prototype will be transferred to future Oculus HMDs.

University of Minnesota presented a bunch of their VR related projects to the conference audience. The most interesting one was a high-resolution, wide-FOV HMD built from an iPad mini and a 3D printed frame. In their demo up to 6-8 people wore the HMDs, dwelling the same VR place simultaneously, while being tracked over a large area using a commercial optical tracker. 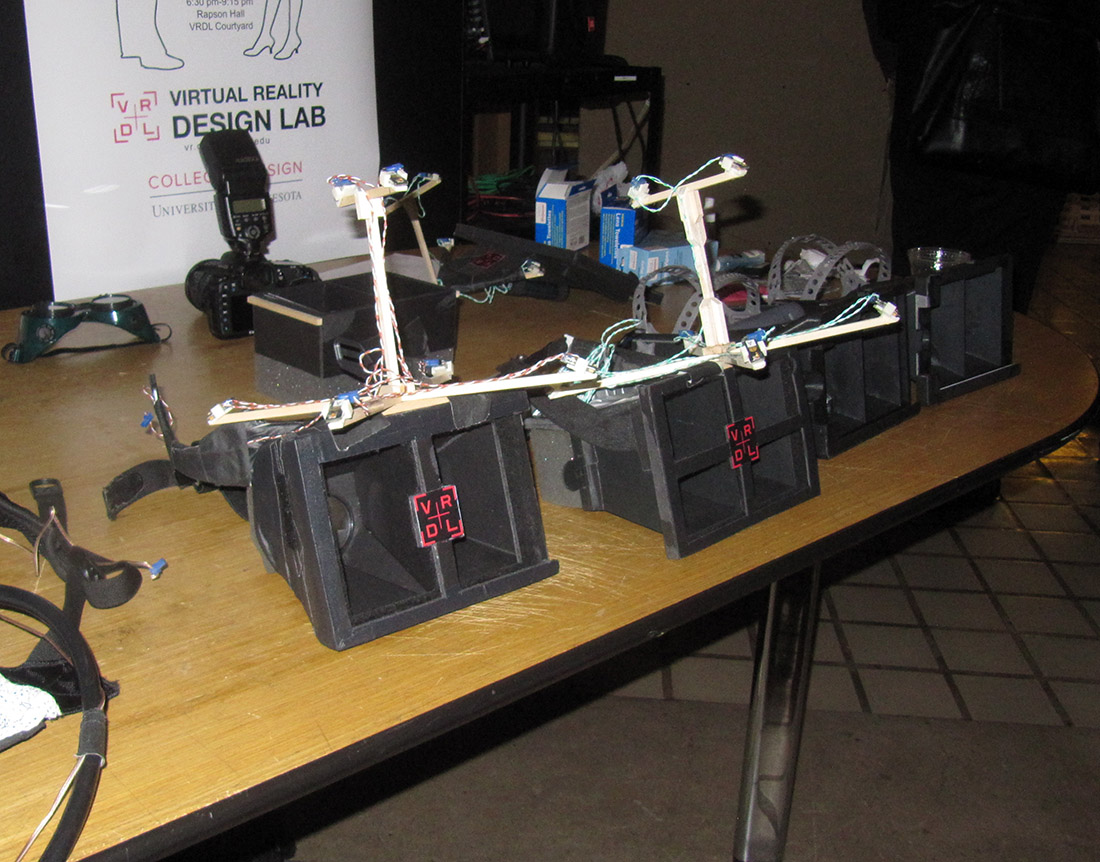 The HMD utilized high-quality glass optics (~$40 a piece) to spread the iPad mini’s 2048-by-1536 resolution to a FOV that similar to Oculus Rift’s. Needless to say the image was much crispier than with Rift, whereas the iPad’s orientation tracking was slightly less responsive than that of the Rift. Overall, I was very impressed with this HMD! 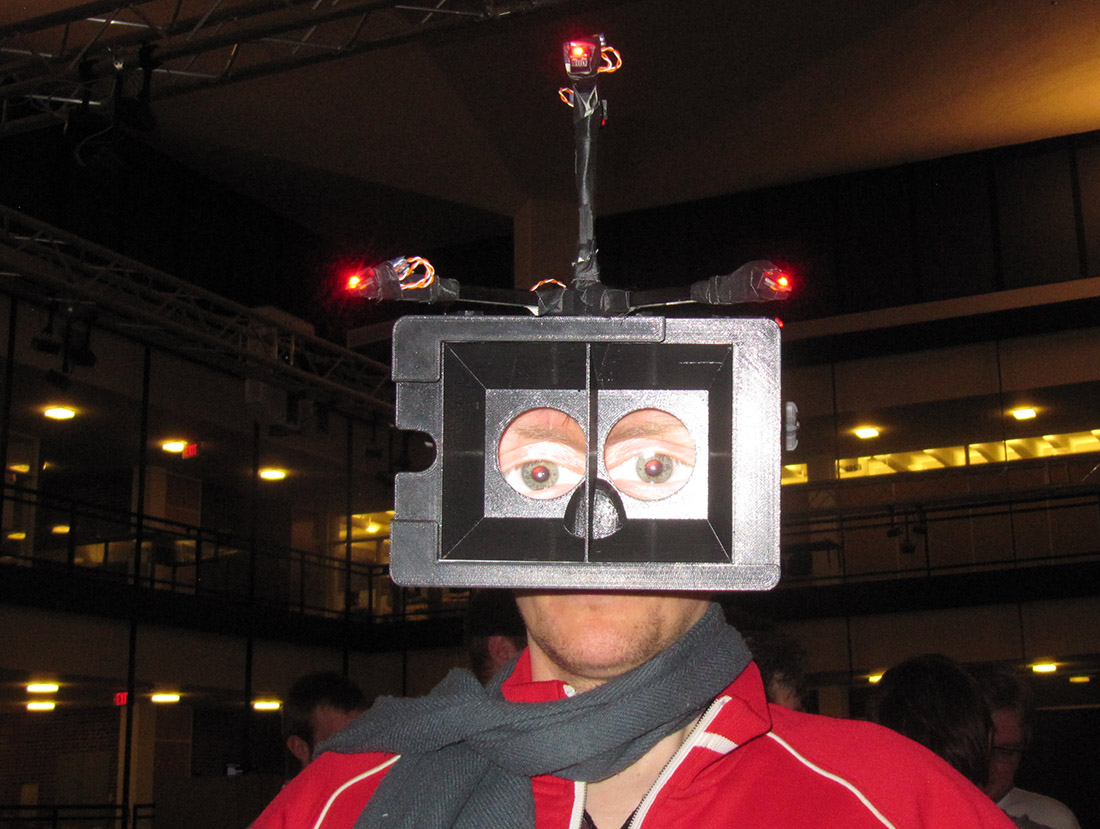 No virtual prostate examinations this year, but at least we got to probe some chest cavities. 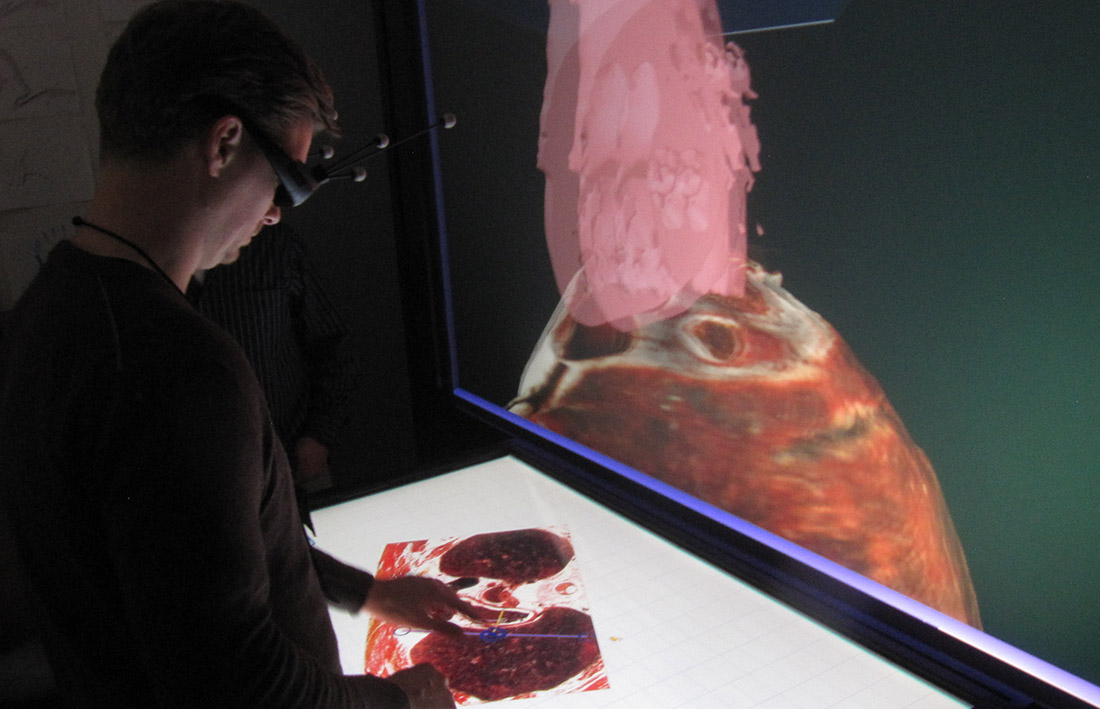 After the conference it was time to get back to basics. 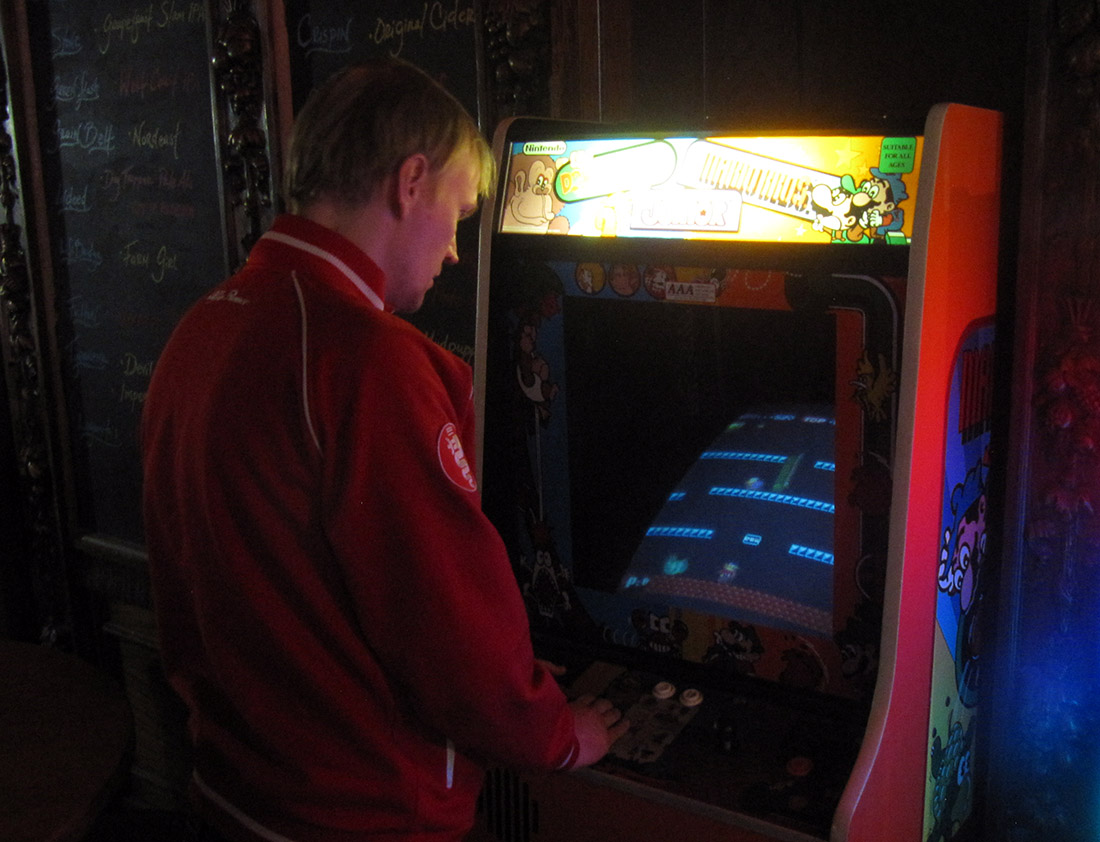 P.S. I also visited Kinect 2 Developer Preview Program Breakfast that was co-organized with Microsoft’s Build Conference in San Francisco. Microsoft hopes to start selling Kinect 2 for Windows in the summer, and us developers with the preview version should get a Kinect 2 Unity plugin even before that. 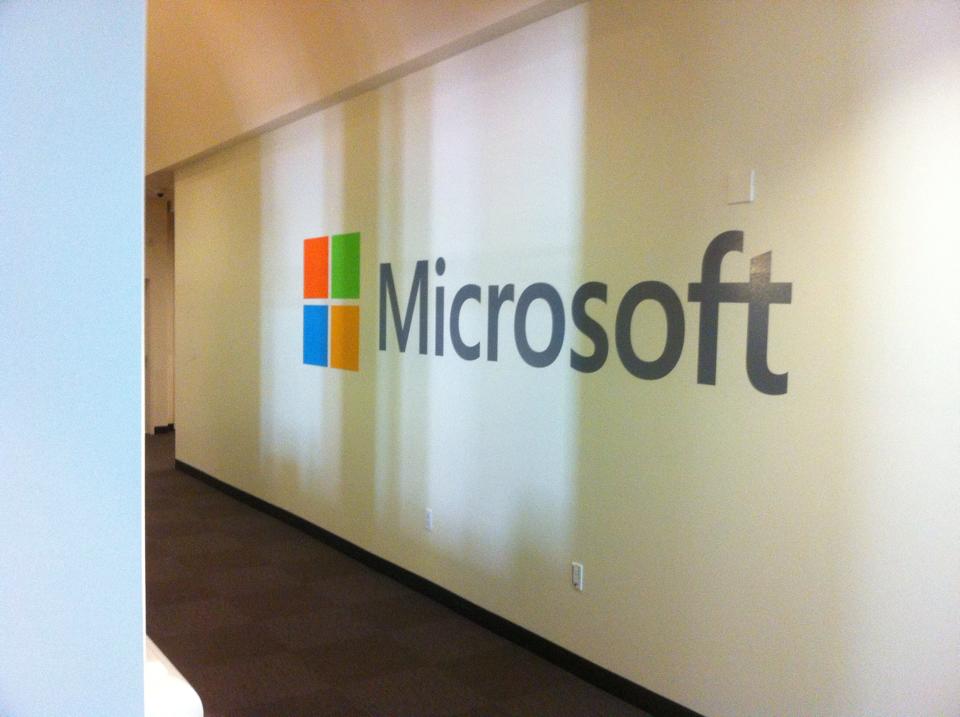