In November I got to borrow a HTC Vive dev kit for a few days. I was responsible for setting it up at a AEC hackathon in Helsinki. Before I share my experiences in detail, here are my two suggestions to Valve:

Overall the experience, particularly running the demos, was great. I already had tried the Aperture Robot Repair demo in August, but the display quality and tracking accuracy still made me very happy. I got very positive reactions from my colleagues in Aalto University to whom I showed the Vive for the first time. 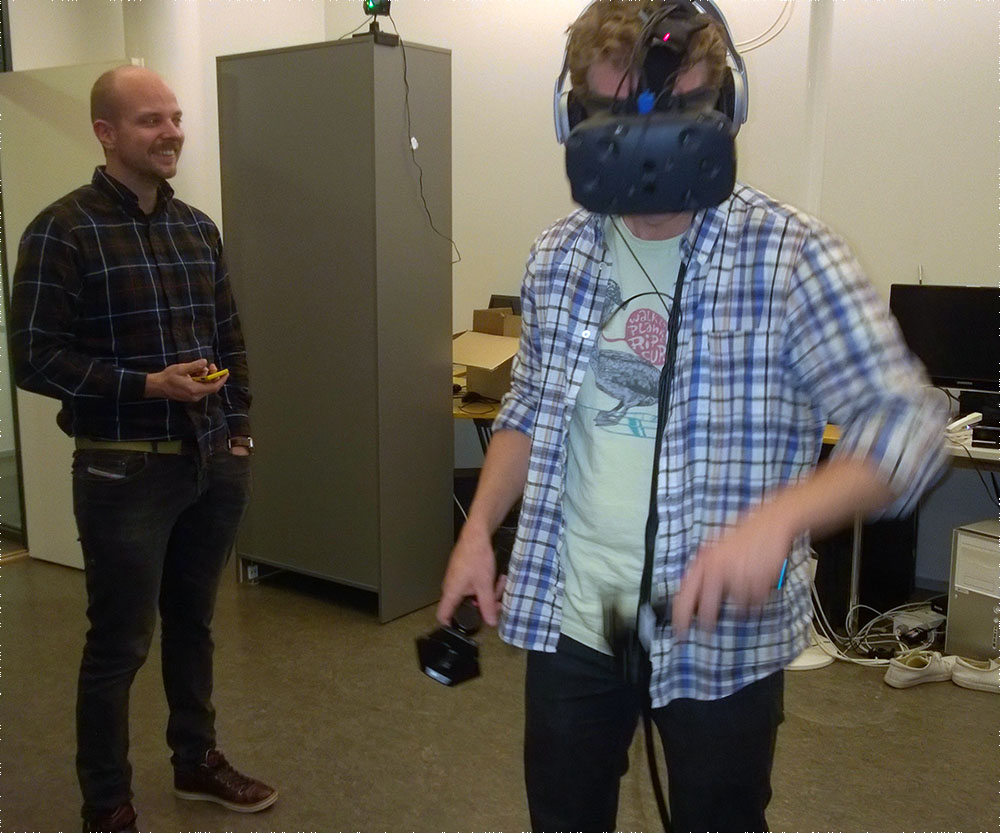 Getting the dev kit to work took awhile. After connecting and placing the physical hardware, SteamVR wasn’t able to properly access the hardware no matter what I tried. And there were plenty of things to try, as can be seen in the SteamVR forum. It wasn’t until I updated the firmware for the HMD and the controllers that everything started working. I had to use rather unwieldy command line tools, whereas Oculus Rift DK2 had offered a simple firmware update process through the Oculus Configuration Utility.

When all the systems showed green status in SteamVR, creating and running a test VR scene in Unity Editor was a breeze. As a side note I’m happy to see that Unity is integrating VR functionality directly into their engine, which eases development for different VR platforms. I’d imagine that Epic is doing the same with Unreal Engine.

Occasionally the Vive stopped working after restarting my computer, and I needed to uninstall Vive’s USB drivers and reboot to solve the problem. According to Valve this issue is related to Vive’s HMD control box. From what I understand the vast majority of problems reported in SteamVR forum can be attributed to that. I believe that the situation will be much better with the 2nd Vive dev kit.

I didn’t have any problems with the tracking quality and everything ran smoothly. My only grievance is that I couldn’t install any of the cool Vive demos from Steam. Currently Valve has to separately set those privileges for each Steam account, and we couldn’t get them to do that in the short time-frame that we had. Instead I resorted to googling for unofficial, 3rd party Vive demos, which understandably had lower production values. For some reason I needed to run each demo in administrator mode to get them to work.

To summarize: this first HTC Vive dev kit, its hardware and parts of the software, feels like it was hacked together by a group of scientists in a lab. What actually happened is perhaps very close to that. In contrast Oculus DK1 and DK2 were slightly more polished, because as a pioneer Oculus had more to prove. This is not a complaint, and I’m quite happy that HTC and Valve decided to grant developers such an early access. HTC Vive, particularly its Lighthouse tracking, is just so good that it’s easy to overlook the lack of refinement in this early dev kit. I hope that soon I will get a permanent access to HTC Vive, so I can integrate it into my RUIS toolkit, enabling developers to combine room-scale Lighthouse tracking with full-body tracking of Kinect.